Sunny Kim Holds Off Tim Turpen For $1,000 Bonus Contest Win
This was the first on the contests to be total score (Like Q-School Finals) Contest 5 starts when we return from Summer Break July 9th!
Thursday, June 21, 2012 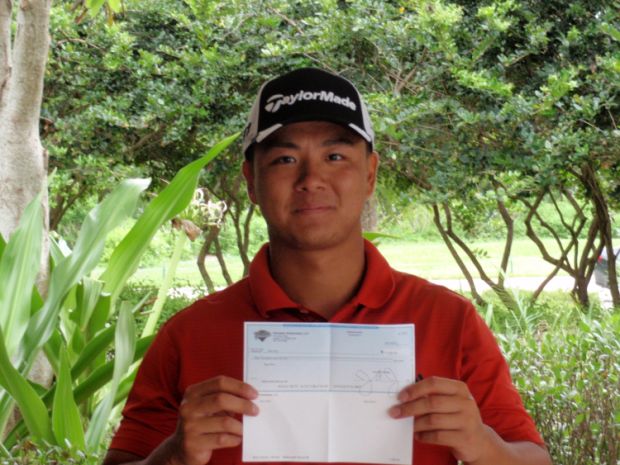 FT. LAUDERDALE, Fla. - Sunny Kim of New York won the 4th of ten $1,000 Nationwide Tour Monday Contests that are being held by the GOLFslinger.com Tour throughout the spring and summer of 2012.

Each contest is 2 weeks (6 playing days) and depending on the contest either the leading money winner or lowest total score for the six days (like Q-School Finals) will win the bonus.   The next contest begins on July 9th when the tour returns to action after the summer break.

Tim Turpen and Sunny Kim started the round and final day of the 4th $1,000 Nationwide Monday Bonus Contest with Kim leading Turpen by 2 shots.   The format of this contest was total score for the six days, like Q-School Finals. (in this case it was only 5 rounds due to the rainout at NPB CC)

Kim's lead disappeared on the first hole when he made double bogey, and Turpen grabbed a 1 shot lead on the second hole. Sunny pulled even with a birdie on #4 and extended his lead back to 2 shots through 7 holes. Turpen eagled the par-5 ninth and birdied the par-5 11th to bring the contest back to even, then moved ahead by 1 when Kim bogeyed the 12th hole. Kim proceeded to beat Turpen by 1 shot per hole on the next four holes, and managed to hold off Turpen by 2 shots to claim the bonus.

These TEN 2012 Nationwide Monday Qualifier $1,000 Bonus Contests give our players an opportunity to play on The Nationwide Tour at a time when they are playing very well.