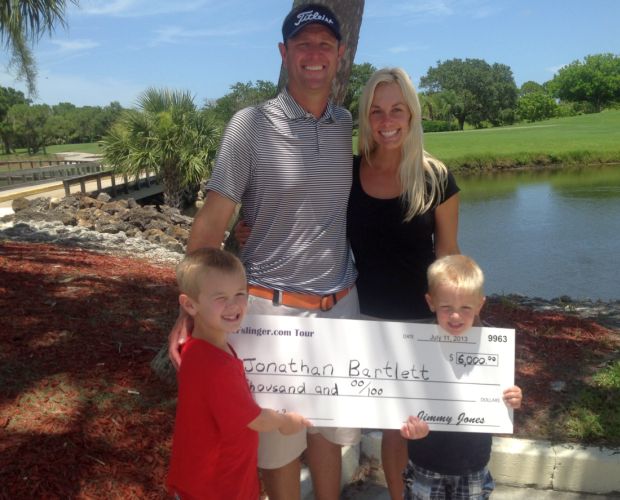 PALM CITY, Fla. – Jonathan Bartlett of Ocala birdied the last two holes Thursday to pull out a one-stroke victory in a Golfslinger.com Tour “major” on the Osprey Creek course at Martin Downs Country Club. Bartlett shot 68-65—133 and earned $6,000 from the $20,525 purse.

In 2005, Bartlett made two Golfslinger appearances. On May 9, he was declared co-champion with Jason Powell when they matched scores on 9 consecutive holes in the sudden death playoff. After a 27 hole dead heat, they were declared co-champions and both were awarded their own full first place check. Then on May 26 at nearby Hammock Creek, Bartlett shot 71 and was second to Steve Scott’s 68. Bartlett earned a total of $535 in those two tournaments.

At Martin Downs, Bartlett made six birdies and three bogeys the first round, seven birdies and a bogey the second. He birdied the first, sixth and eighth holes both days.

Rafael Campos of Puerto Rico and Sunny Kim of Palm Beach Gardens tied for second at 134 among 39 starters on final round scores of 66 and 69. On his final nine, Campos eagled the par-5 13th hole and birdied 17 and 18. Kim was the first round leader on a 65.

Another 36-hole tournament is scheduled Monday and Tuesday on PGA National’s Champion course with the winner guaranteed $5,000. An 18-hole event will be played Thursday (July 18) at North Palm Beach CC.

PALM CITY, Fla. - 18 out of 39 players are under par after the opening round of the third GOLFslinger.com Tour Major of 2013. Sunny Kim leads the way after firing a 6-under par 65. Olin Browne of Hobe Sound, FL, Mike Kartrude of Royal Palm Beach, FL and Horacio Leon from Santiago, Chile are tied for second at 5-under par 66. Four players shot 68 and are tied for fifth place. The winner will take home $6,000.

If you have earned a check or played at least 3 events during the current Major Ranking Period you pay $590, otherwise you pay $690. First come, first serve, pay now to guarantee your spot. Read the front page of website for all details.