Justin Bryant picks up his 2nd MLGT Victory with a 4-under par 67
Charlie Winegardner finished with 68 followed by Justin Peters with 69
Thursday, April 2, 2015

Both Bryant, 27, and runner-up Charlie Winegardner, 25, of Lothian, Md., who finished about an hour earlier, bogeyed the par-4 18th hole. Winegardner eagled the par-5 17th and had three birdies and another bogey. He collected $575.

Justin Peters, a current Web.com Tour member (the Web.com Tour is on break until April 16) was third with a 2-under par 69 followed by Alejandro Garmendia in solo fourth with 70. Seven players tied for 5th place at even par. 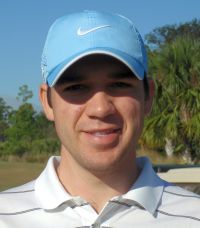