Nathan Davis only player to break 70, wins by 1 shot over Cory Richmond
Davis had 4 birdies and a bogey in his 3-under par 69 round
Monday, February 16, 2015

CORAL SPRINGS, Fla. – Nathan Davis of Taunton, Mass, scored his first victory on the Minor League Golf Tour with a three under par 69 on the TPC at Eagle Trace course.

Davis made two birdies on each nine (Nos. 4, 5, 11 and 15) and bogeyed the par-4 13th hole to edge Corey Richmond of West Union, Ohio. Richmond had five birdies and a bogey before he bogeyed the last two holes for 70.

The 15th tournament of the year had 37 entries. Next on the schedule: Wednesday, Jacaranda GC, and Thursday, Winston Trails GC, Lake Worth. 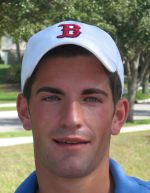