After they matched seven under par 65's in regulation, each with eight birdies and a bogey, they halved the entire back nine with six pars, bogeys at the par-3 12th hole and birdies at the 13th and 15th, both par-5's.

Going back to the par-3 17th, Jacobs two-putted from 15 feet for the win, sinking a clinching three footer after McCauley missed his par putt from 12 feet. McCauley had missing the green off the tee and chipped on but was unable to save par.

The previous MLGT playoff record was nine holes, set May 9, 2005, on the Estate course at PGA National in Palm Beach Gardens by Jason Powell and Jonathan Bartlett. With darkness preventing further play, they were declared co-champions.

There were 22 starters. Next on the schedule: Thursday, Abacoa GC, Jupiter, and Monday at West Palm Beach Municipal GC. 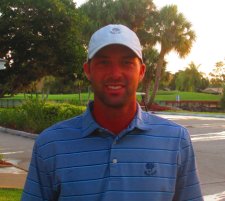