Brian Fister wins four hole playoff over Mitchell Gregson
Four players tie for third at one over par 73 on a tough day at Parkland
Monday, February 8, 2016

They had tied at three under par 69, then matched pars of 5, 3 and 4 on the first three playoff holes, before Fister two-putted from 30 feet for par-4 at the fourth hole for the win. Gregson missed the green, chipped on and missed a 20-foot par putt.

In regulation, Fister birdied four of his first eight holes, bogeyed the 10th and parred in. He received $775 from the $3,780 purse. Gregson, second among 28 starters, had five birdies, two bogeys and collected $570.

Fister and Gregson were the only players to best par-72 but anyone who broke 80 cashed a check. Both are unprecedented scenarios in more than 1,300 tournaments the MLGT has staged since August, 2004.

Jon McLean from Weston, FL, Dan McCarthy from Syracuse, NY, Brendan Lemp from Westerly, RI, and Zach Steffen from Des Moines, IA all tied for third with one over par rounds of 73. Parkland was a stearn test of golf for the players.

The MLGT has two more 18-hole tournaments this week, Wednesday at Abacoa GC, Jupiter, and Thursday at Fountains CC-North, Lake Worth. 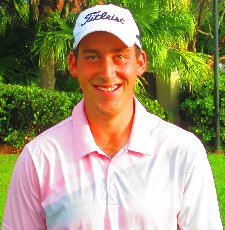