Josh Hart wins on the 2nd playoff hole after tying Sunny Kim with 64
5 of Hart's 7 MLGT victories have come on the Osprey Course at Martin Downs
Thursday, July 27, 2017

Hart and Sunny Kim of Queens, NY, had tied at seven under par 64. They halved the first extra hole with par-4's. At the drivable par-4 second, Kim could not find his ball which was headed pin-high but well left as he tried to reach the green off the tee. He had to return to the tee and eventually made double bogey. Hart won with a two-putt par.

Hart's coach and most recent guest on Golf Channel's Morning Drive, Mike Malizia, was out caddying for Josh today. Looks like they are working on the right stuff. Congrats Josh and Mike on the win.

A big thank you to Amino VITAL for sponsoring this event and providing MLGT members a tour towel, water bottle and Focus Zone. 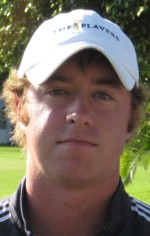