PALM CITY, Fla. – Bennett Buch of Sykesville, MD, making his first start on the Minor League Golf Tour, birdied the fourth extra hole for the win Thursday at The Evergreen Club. Buch outlasted Dominick Vennari of Baltimore, MD, after they tied at seven under par 65.

At the par-3 fourth, Buch sank a 15-foot birdie for the victory moments after Vennari missed from 25 feet. They halved the first three holes with birdie-4, par-4 and another birdie-4. In regulation, each made seven birdies, five on the back nine. Neither had a bogey.

For his first pro win, Buch received $700 from the $3,350 purse. Vennari, runnerup among 25 starters, collected $600, including $50 from the skins game. Two of his four MLGT victories heretofore had been at Evergreen. 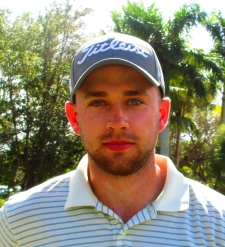