Joaquin Lolas fires 68 at The Evergreen Club to earn his first MLGT win
Steve LeBrun, Dominick Vennari and Joey Lane tie for 2nd one shot back at 69
Thursday, March 14, 2019

PALM CITY, Fla. – Joaquin Lolas of Juno Beach, FL overcame a bogey and a triple Thursday to capture his first victory on the Minor League Golf Tour. At four under par 68 at The Evergreen Club, Lolas won by a stroke. He made eight birdies in addition to a bogey at the fifth hole and a triple bogey at the 10th, both par-4's. It was Lolas’ 18th MLGT start, including three as an amateur in 2014. He earned $725 from the $3,310 purse, raising his career earnings to $3,128.

Click here to watch Joaquin Lolas in action during the event

Tied for second at 69 among 25 starters were Steve LeBrun of West Palm Beach, FL and Joey Lane of Great Falls, VA, each with five birdies and two bogeys, and Dominick Vennari, Baltimore, MD, six birdies and three bogeys.

There are still a few spots left in MLGT's 2nd Qualifying School Contest of 2019 which starts Monday. It will be a 2-day event staged at The Fox Club Monday-Tuesday March 18-19. The entry fee is $440 with 40% of the field earning a check. The Contest portion is optional and is an extra $200. The player with the lowest score that is entered in the contest will win $5,000 to put towards the Q-School entry fee of their choice. Any questions call director Scott Turner at 561-598-9630. 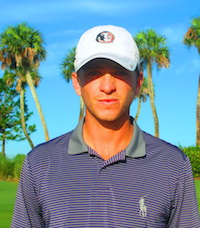