Carter Page and Dominick Vennari tie for the win in a weather shortened event at Abacoa GC
Piri Borja, Eric Cole and Jacob Eggers are tied for the lead in Monday Q Contest #5 with one day to go
Tuesday, June 11, 2019

Play was suspended at 1:45pm when the final group was on the 14th fairway. After a 4 hour weather delay the course became unplayable and play was called for the day. MLGT policy states that if the entire field completes at least half the scheduled starting holes (9 of an 18 hole event) then the event is official and the number of holes that the final groups finishes will count. Even though the first five groups finished all 18 holes, the final group finished 13 so it will be a 13 hole event (par 52).

Today's event was the second of three 1-day events this week that make up 2019 Monday Qualifying School Contest #5 presented by Abacoa Golf Club. Overnight leader Nick Latimer had a tough day (+2) and enters the final event three shots behind Piri Borja, Eric Cole and Jacob Eggers. The player with the lowest 3-day cumulative score will win a $1,000 bonus to compete in a Monday Qualifier on the PGA or Web.com Tour. 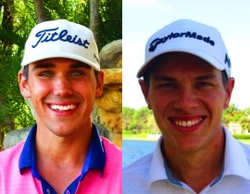