BOYNTON BEACH, Fla. – Jeremy Gandon of France and Jay Card of Jupiter, FL and Shelter Island, NY, were declared co-champions Sunday when darkness prevented a playoff at Indian Spring Country Club. They tied at six under par 66 on the East course, each with seven birdies and a bogey. They received $775 apiece from the $4,875 purse. Gandon collected an additional $232 from an optional bonus pool for a total of $1,007. He was making his second MLGT start, finishing out of the money in his previous appearance in February at Abacoa Golf Club.

Six players tied for third with 67's, each receiving $375 from the main purse, plus bonuses.

There were 5 skins out worth $64 each. Click on any of the $ symbols under the skins/total column to view the skins results.

40% of the field earns a check. EAST course. Play will be in foursomes with two players per cart with a divider in between. 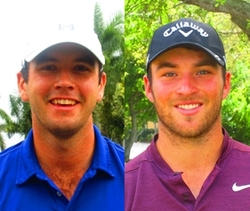