PLANTATION, Fla. - Ben Cook from Caledonia, MI started the final round three shots behind Eric Cole. Cook played the first 10 holes of the final round 5-under par and found himself atop the leaderboard after Cole was 3-over par during that same stretch. Colin Monagle would birdie the last while Cook made bogey but his margin of victory was still one.

21 of the 44 players chose to enter the $200 Qualifying School Contest #5 presented by Joey D Golf. Ben Cook earned a $5k bonus to put towards his Q-School entry fee.

A big thank you to Plantation Preserve Golf Course for hosting this event 2 weeks before 2nd stage of Q-School.

PLANTATION, Fla. - Eric Cole from Orlando, FL has made 15 birdies and only 1 bogey in 36 holes and will enter the final round two shots clear of the field. He has rounds of 65-63 at Plantation Preserve and after coming close at the previous two Qualifying School Contests he will look to earn the $5k bonus tomorrow to cover his Q-School entry fee this year.

Colin Monagle and Albin Choi are two back of Cole heading into tomorrow's final round. First round leader Ben Cook added 68 to his opening round 63 and is in solo 4th and 3 shots back entering tomorrow.

There was only one skin out for the second day in a row worth $480. Click on any of the $ symbols under the skins/total tab to view the skins results.

A bogey free 63 finds Ben Cook at the top of the leaderboard after day 1
Jake Marriott and Colin Monagle are one back, cut to top 18 and ties after 36 holes

PLANTATION, Fla. - Ben Cook from Caledonia, MI made 9 birdies and no bogies during the opening round at Plantation Preserve Golf Course Monday. On top of holding the opening round lead by a shot, he also won the only skin of the day with a birdie on the par-4 13th worth $480.

Jake Marriott and Colin Monagle are right behind Cook heading into day 2 with 8-under par 64's.

There will be a 36 hole cut to the low 40% and ties. All players that make the cut will earn a check. Come play a 3-Day event on the course that is hosting 2nd stage of Korn Ferry Tour Q-School October 19-22. Setup will mirror Q-School setup. 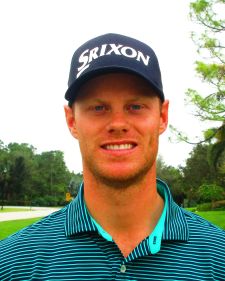