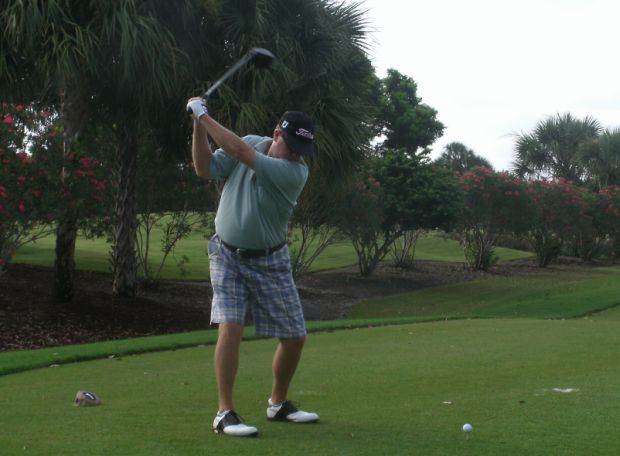 PLANTATION, Fla. – Tim Turpen of West Palm Beach birdied the first playoff hole Wednesday to score his 14th victory on the FuZion MLG Tour. Turpen edged Brett Bergeron of LaPlace, La., and Dion Gonsalves of Pembroke Pines after they tied at three under par 68 on the East course at Jacaranda Golf Club.

At the par-4 16th hole, Turpen hit his second shot to within five feet. Then when Bergeron had to punch out from the trees and eventually made a five footer for par, and Gonsalves missed his 15 footer for birdie, Turpen claimed his third FuZion MLGT title this year. He earned $950from the $5,667 purse. Bergeron and Gonsalves each got $562.50. Bergeron has 19 career MLGT wins, Gonsalves none.

In regulation, Turpen made three birdies on each nine, overcoming a bogey at the 11th and a double bogey at the 12th with birdies at Nos. 1, 7, 9, 10, 14 and 16. Bergeron had three birdies. Gonsalves had six birdies, including one on each of his last three holes, and three bogeys.

Josh McCumber and Brad Klapprott (who won last Wednesday) tied for fourth at 2-under par 69 followed by 2009 MLGT Tour Champion Eric Cole at 70.