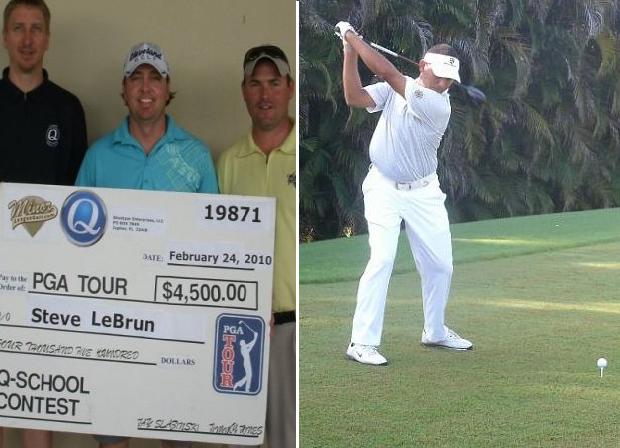 LAKE WORTH, Fla. – Steve LeBrun of West Palm Beach and Carlos Velez of Miami were declared co-champions Thursday in a Fuzion-Minor League Golf Tour event on the North course at Fountains Country Club. A combination of a large field of 80 players, weather delays, and early darkness due to heavy cloud cover cut the event to 12 holes.

Tour policy dictates all players must complete nine holes for an event to be official. After that, if all players do not compete 18, scores are based on the number of holes the last group of players completes. On Thursday, that was 12 holes and LeBrun and Velez were tied at four under par 44.

It was a record 28th MLGT victory for LeBrun, breaking a tie with Justin Peters, while Velez won a professional golf tournament for the first time. LeBrun had four birdies. Velez made an eagle, four birdies and two bogeys. Each received $1,000.

In addition to the victory, Steve LeBrun won the first of five 2011 PGA Tour Q-School Contests. The Fuzion MLGT will pay for his entry into 2012 PGA Tour Qualifying.

Thankfully, the shortened event did not effect the contest outcome. Scott Hawley, who started the day $104.29 behind LeBrun, and Jimmy Lytle who was $419.93 back, played in the same group with LeBrun who led or was tied for the lead for the entire 18 holes.

Next week the tour plays Monday at Jacaranda, Wednesday at Madison Green, and Thursday at The Presidents. Addtionally the MLGT is having its first ever Cumulative 3-Day Event. A player must play all three one-day $190 events Feb 14, 16 & 17 to be eligible. Then 100% of the $300 cumulative 3-Day Entry is put into the purse, with the usual 50% of field MLGT payout based upon total scores from each individual event.

NORTH COURSE, Event shortened to 12 holes due to weather and darkness 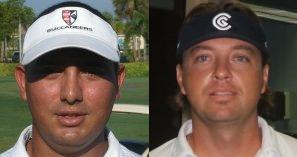