ROYAL PALM BEACH, Fla. – Scott Hawley of Shrewsbury, Mass., overcame an unusual bogey on the first hole Friday, rallying for an eight under par 64 to win a Fuzion-Minor League Golf Tour event at the Links at Madison Green.

Believing he had hit his first shot of the day into the water, after a brief search Hawley took his penalty drop and hit his next shot to the green. But while walking toward the green he found his original ball. By rule, Hawley was obliged to play the second ball and bogeyed the hole. 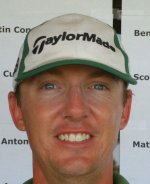