Luke Graboyes and Andrew Kozan (a) tie for the win with 66 at Plantation Preserve GC
Playoff's are temporarily suspended due to the Covid-19 rules
Monday, June 8, 2020

Kozan and Graboyes matched five under par 66's at Plantation Preserve Golf Course, each scoring six birdies and a bogey. Kozan made five birdies on the back nine, Graboyes four. Both birdied the par-5 10th and 18th holes.

Kozan just finished his junior year at Auburn University where he plays on the golf team.

Due to the Covid-19 restrictions playoffs are temporarily suspended and all ties are split. Graboyes and Kozan (a) split 1st place ($900) and 2nd place ($600) prize money and earned $750 each. It is the third tie in five tournaments since the MLGT resumed play May 18.

Another amateur, Tyler Strafaci of Davie, FL, who was making his second appearance on the MLGT, took third with 67 on five birdies and a bogey. At 68 were Englishman Finlay Mason and Jacob Eggers, Boone, NC.

The MLGT’s 41st tournament coincidentally drew 41 starters and returned $5,130 in prize money. Next on the schedule is the Summer Team Championship on Tuesday at the Country Club of Coral Springs. 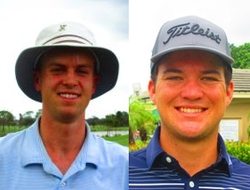