CORAL SPRINGS, Fla. – Robert Taylor of Inverness, FL, birdied four of his last five holes during Wednesday’s round enroute to an eight under par 63 and his second victory on the Minor League Golf Tour.

Taylor made four birdies on each nine at the Country Club of Coral Springs highlighted by a birdie, par, birdie, birdie finish. Starting on the tenth hole, he also birdied Nos. 10, 12, 14 and 15 as well. 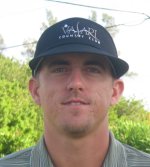