LAKE WORTH, Fla. – Siyan Liu from Beijing, China overcame a late bogey with a bounceback birdie on the 17th hole to card a 5-under par 66 and earn his first professional victory on the West course at Fountains Country Club. In total Liu had 7 birdies and 2 bogies.

Liu's victory earned him $975 from the $5,250 purse. This was his 7th start on the MLGT since turning professional on January 10 of this year.

Tied for 2nd at 68 were Evan Russell of Essex, VT, Hugo Bernard of Mont-Sainf-Hilaire, Canada and Dane Cianelli of Fort Lauderdale, FL. They earned $546.67 each. Bernard earned an extra $200 from the optional bonus pool and two skins worth $64 each for a total of $874.67.

The MLGT has two more one day events to close out February: tomorrow at Saint Lucie Trail Golf Club and Thursday at Jupiter Country Club. 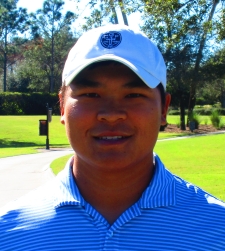