LAKE WORTH, Fla. – Luke Graboyes outscored his younger brother and 38 other contestants Thursday at Atlantic National Golf Club for his 14th win on the Minor League Golf Tour. Luke, 25, posted six under par 65, while brother Michael, 24, tied for third with 67.

Luke made seven birdies and a bogey, Michael four birdies. Luke received $1,000 from the $5,360 purse and another $214 from an optional bonus pool. Michael collected $410. They are from Watchung, NJ, and joined the MLGT in September, 2017, and September, 2018, respectively.

In between the brothers, John Stoltz of Middletown, NY, was the runnerup with a bogey-free five under 66, earning $640.

Leandro Marelli of Casilda, Argentina, won the eighth and final Monday Qualifier Contest of the year with a 54-hole total of 206. He received $1,000 to be used toward a Monday qualifier next year on the PGA or Korn Ferry tours. Marelli tied for second Monday at the CC of Coral Springs with 65 and was solo second at 68 Tuesday at Melreese CC in Miami. He shot 73 here Thursday, missing the money by one stroke. 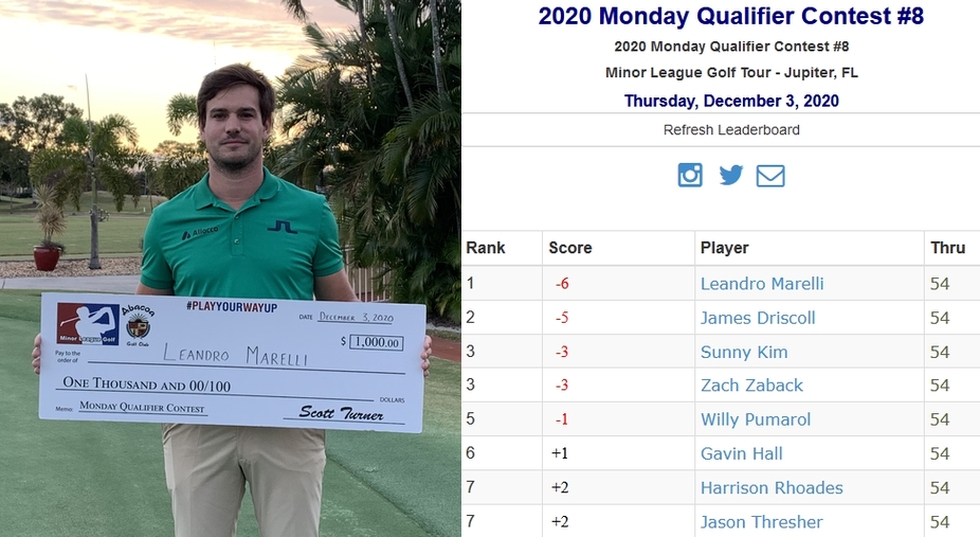