With play starting on the 10th hole each day, Borja, of Coral Springs, holed out for eagle from 50 yards at the par-4 ninth hole the final round to catch Gehl.

Gehl, of Carmel, IN, scored 66-65 on an eagle, four birdies each day and one bogey. He collected $1,700 in gaining his eighth MLGT victory.

Due to covid-19 restrictions, playoffs are temporarily suspended so co-champions were declared and Gehl and Borja split 1st ($2,000) and 2nd place ($1,400) prizes.

Michael Buttacavoli of Miami Beach was third among 42 starters with 68-64—132. He eagled a pair of par-5's Tuesday to go with three birdies and a bogey each day.

Jamie Lovemark, Piri Borja and Blake Morris are tied for the lead after opening round 65's
17 players are within 4 shots of the lead entering the final round

CORAL SPRINGS, Fla. - Jamie Lovemark from Rancho Santa Fe, CA, Piri Borja from Coral Springs, FL and Blake Morris from Waterbury, CT are tied for the lead after matching 5-under par 65's at the CC of Coral Springs. Lovemark and Morris did not make a bogey while Borja made one on his final hole of the day (#9).

A pair of MLGT major winners, Bo Hoag and Brad Gehl will enter the final round one back after 66 on Monday. Hoag is heading to Texas next week for the restart of the PGA Tour season.

There was one skin out on day 1 worth $400. Click on any of the $ symbols under the skins/total column to view the skins results.

There is an OPTIONAL $50 2nd day shootout for players that are outside the money after day one (70 and higher). If you would like to participate you must sign up and pay online before the first tee time on Tuesday. No exceptions.

40% of the field earns a check. Range will be closed. Groups will be in foursomes starting on Hole #10. No caddies or spectators allowed. 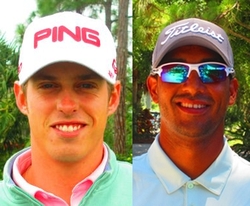