Gavin Hall and Rodrigo Lee tie for the win with 66 at Fountains Country Club
Due to the Covid-19 restrictions playoffs have been temporarily suspended so they were declared co-champions
Monday, June 29, 2020

LAKE WORTH BEACH, Fla. – Gavin Hall of Pittsford, NY, who had nine wins in less than three years on the Minor League Golf Tour, and Brazil’s Rodrigo Lee, making his first start on the South Florida mini-tour, were declared co-champions Monday.

Playing the South course at Fountains Country Club, they matched six under par 66's. Hall made seven birdies and a bogey at the par-3 17th hole. Lee managed a bogey free round with six birdies. Each received $600 from the $3,130 purse and an additional $191 from an optional bonus pool. Hall has earned $32,715 since joining the MLGT in September, 2017.

The MLGT’s 51st tournament of the year drew 25 starters. A 36-hole tournament is scheduled Wednesday and Thursday on the Fazio course at PGA National.

Monday Qualifier Contest #3 starts next Monday. It is comprised of three 1-day events at PGA National Estate (7/6), Abacoa GC (7/7) and Indian Spring CC (7/8). All professionals that play all three events are automatically entered into the contest and the player with the lowest cumulative score wins a $1k bonus to compete in a Korn Ferry or PGA Tour Monday Qualifier.

50% of the field earns a check. SOUTH COURSE. A face covering is required everywhere except on the range and golf course. Arrival time for this event will be 45 minutes before your scheduled tee time. 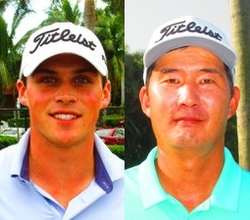